This Max resembles Kramm the most.

The Weldos Max has one of Wuzzo's eyes with sharp teeth at the sides of it. He has a large crane on his head with a wrecking ball. His right arm is black, yellow and grey striped, like his hands. However, his two fingers have two lights and small thumbs. At the left side, he's similar to Kramm except he's round jointed and mostly different. His feet are yellow and black with Wuzzo's toes and bear a similarity to boots. His horns are curvy and grey.

Can fire oil from his drill 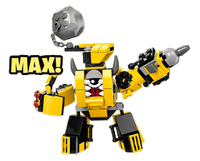 The Weldos Max can be built using parts combined from Mixels sets 41545 Kramm, 41546 Forx, and 41547 Wuzzo. Extra parts are left over after construction. Instructions will be available on the LEGO website downloads page.

Retrieved from "https://mixels.fandom.com/wiki/Weldos_Max?oldid=176753"
Community content is available under CC-BY-SA unless otherwise noted.