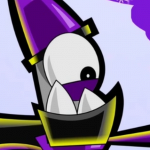 If you want to contact me, check me out here!

My Involvement with Mixels

Like most, I got into Mixels around the releases of Series 2 and Series 3. I actually kind of knew about Mixels shortly after Series 1 came out, but knew little to nothing. The first time I saw Mixels as a cartoon was kind of an interesting story. My aunt brought me and my cousins to a movie theater one day. And for whatever reason, the lobby had a TV that normally had Cartoon Network playing. This was probably some time in February or March or so, and it was probably a commercial break because I look over at the TV for a minute and I see Mixels playing. Of course at the time, I didn't know that's what it was. All I see is some character trying to get an apple off of a tree. That's literally all I remember. During the next few months, I saw Mixels on TV again. Commercials for the show, the lego toys, or episodes of the show itself playing. I started gaining more interest as time went by. In June (i'm assuming), I went to Walmart one day and this was shortly after the release of Series 2 of course. I ended up going to the LEGO isle because why not. I end up seeing a box with some Mixels in it. I ended up getting Balk and Lunk, and built them the next day. I thought it was cool how Balk came with a Nixel in his set. However, I knew who Flurr was, and I when I saw a blue mixel with ball eyes, I thought it was Flurr. It was, like I said, Lunk. I wasn't actually disapointed because, hey, I was a new Mixels fan, thought all Mixels were cool, and all of this because I was only about 9 years old. (I may have actually been 10 if it were June, it depends on when in the month because my birthday is in June.) Only weeks later, we went back to Walmart and I ended up with Krader and Flurr. Again, I thought the whole Nixel thing with sets was cool. I started to think it was kind of randomized, but i wasn't sure. Anyway, the day I got Series 3 is oddly memorable, and i'm still not sure why. It's probably because of how hyped I was to hear about them, and the fact I was surprised to see them at all. IN STORES TOO. Okay, anyway, I believe it was August 20th, 2014. I normally have this really well ability to remember memorable dates so i'm probably right. My family (and one of my brother's friends was there too) went to the Bronx Zoo for a day trip. The zoo i belive closed at 5 or so, so when we were done we headed to a mall. I remember the name of it, but i don't know how to spell it and I don't feel like looking it up. Just note that it was nearby. Anyway, we went to Red Robin or something for dinner. Before that, when we were walking a bit in the mall, I noticed a LEGO store. I had no idea that these even existed until then. And at the time, this was the closest one to us (~3hr 30min away, if i remember correctly). We were only intended on checking it out, just looking around. Mostly because I didn't know if I had money. And man, I was glad I did. Of couse, Series 3 wasn't supposed to come out until September. But at least some people got to see some series in stores early. Interestingly, I ended up being one of them in this case. Over by the register, they had ALL OF MIXELS SERIES 3. (they also had some of Series 2, but Series 3 was newer and more hyped at the time). I asked if I had money, I at least needed the Wiztastics. I had enough to get all 3. My brothers, decided to be nice for once too. They had a slight interest in Mixels, but it wasn't as big as mine. Joseph, one of my brothers got the Glorp Corp. My other brother, Billy, got the Spikels. It was a great day indeed. About a week and a half later, the Mixed Up Special aired, so we all watched that, too. In September, when school started again, I got a few of my friends into Mixels. In October, I created my first YouTube channel which was almost entirely Mixels-related.

With the end of Mixels being a few months past at the time, the community completely changed. Some tried to revive Mixels (some still are, and I swear, it won't get ANYWHERE), some left the community, a few stayed, some old mixels fans came back. It was all quiet. I reached 2000 subs in February, and never got another milestone on my first channel ever again. It was partly because of my of my most hated, regretful, and guiltful actions ever. Of course, starting to lose interest into Mixels is one thing, which definetley saddened some, or really, many fans. I was literally one of the most popular and influential Mixels community members period. However, I officially lost interest in April 2017. I also started to become friends with Peyt0n, who is more well know as and was known as at the time as PeytonYT. He kinda lost interest around the same time as me. However, him and I both started hating on Mixels and the Mixels community. I can't speak for him, but I bet he feels the same way or a similar way as me. I completely regreted all of it. People ended up seeing me as an enemy, a person to dislike for a reason, a hate-figure. Nothing good anymore. After months and months of quiet, and nothing about Mixels, I brought up a conversation with one of my long-time friends. Him and I were talking and I forget who it was, but someone said, "Hey, remember Mixels?" We talked about it for quite a bit, actually. Later on, I ended up returning to the Mixels community in late 2018. When people realized who I was, people were confused and said things like "Boycat? I thought you hated Mixels!?". This is when I started to apologize and admit I was the one at fault in 2017.

As of today, I am back in the Mixels community. I am planning on rebuilding my Mixels collection, as I don't have all Mixels anymore (some broke, and I gave my Series 2 to my friend in 2017 shortly after I lost interest). But of course that'll take time. I also have plans to make more Mixels content like I used to but now better than ever.

My Favorites in Mixels

Episode: A Quest for the Lost Mixamajig

Retrieved from "https://mixels.fandom.com/wiki/User:Tkhemili04?oldid=368967"
Community content is available under CC-BY-SA unless otherwise noted.