Hello, NixFix here and welcome to my page!

How do I know Mixels?

In early February 2014, I visit on the Cartoon Network US website and I see a new show called "Mixels". But I was not interesting about this show until 3 moths later, I see a person I know on Deviantart that she post Mixels fanarts for my first time. Then late May 2014, when the show came pop out in my country, I start to like it!

I joined Mixels Wiki in July 2014 after Deviantart. I like to talk other people in chat. But I always triggered and angry to them (posting my terrible rants even on deviantart) until in June 2015 and end up become Globally Blocked in other wiki.

Later I came back in June 2016 (1 year after globally block), and apologizing to other people in this fandom for what I did in past. As for now, I always care and friendly.

(nickname Ning) is my first and main Nixel oc. 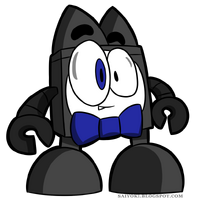 Ning is exactly same as the Nixels, except his blue right eye and arms. He has a blue tie and a semi circle on his feet. He is somewhat a little taller than the Nixels.

Little is known about Ning's early life. Unlike the other Nixels, he's kind and friendly of both Mixels and Nixels. He was an orphanage but later lived the same house with Vulk.

Retrieved from "https://mixels.fandom.com/wiki/User:NixFix-971?oldid=344492"
Community content is available under CC-BY-SA unless otherwise noted.

Ranked #6
on this wiki