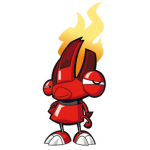 aka Lego Mixels - Mixels and more!

Mixels Season 1 was great I see first episode is Wrong Colors, Epic Comedy Adventure was great, Murp Romp was good, I love Series 1,2,3 and they use Atomic Cartoons for animation it was great.

Mixel Moon Madness was great I got Series 4 but Nixels & Major Nixel are change voice but I still enjoy episode.

A Quest for the Lost Mixamajig was good but the Atomic Cartoons (Season 1 & Mixel Moon Madness ) now use Digital eMation, Inc it good but when Series 1, 2 , 3 , 4 show are far away they pretty bad.

Every Knight Has Its Day was ok but they should force of Series 7 not Mixels Backgrounds and this is first time that because Nixels did not Appearance in episode.

Nixel, Nixel, Go Away (know as Series Finale) I can't tell it was good or bad that because only Nindjas do something but they force Background Mixels.

When I got new tablet I got a YouTube I start Lego City but I delete video then I use Mixels for video I didn't complete (Series 1,2,3) but I did not force Timeline of Mixels. I start series Called Lego Mixels vs Nixels, I don't know how use stop motion so use record but in 2015 after new year I cancelled and delete that because I don't get lot view and I quit YouTube.

I decided to come back YouTube make Mixels video but I still not force Timeline of Mixels I make new series Called (same name YouTube) Lego Mixels - Mixels and more! later renamed Lego Mixels the Series I still use record until I use stop motion called VideoPad Video Editor I make video Series 1,2,3,4,5,6,7,8 and 9, I still don't so many view but I continued make video but when I find out mixels will come to end I try make mixels continued, make series 10 upload on called lego Ideas but it did not work. I was make finale video of my but I saw video that mixels series 10 might come out in future so I continued make video.I remake of mixels season from show. I decided get booger, scrud, blip, zabo and other background.

In 2019 it mark 5th Anniversary of Mixels franchise, I make Called Lego Mixels: The Adventure Begins first part in 2019 and concluding in 2020 After 2nd movie released I decided making other sequel for Lego Mixels Movie 3: Enter the Mixelverse Space going released in 2020. I don't upload video so much because some reason. When I heard YouTube will had a FTC & COPPA that make video is make for kids or not also make delete my channel or The end of YouTube but nothing happen.

Retrieved from "https://mixels.fandom.com/wiki/User:MixJR13?oldid=369144"
Community content is available under CC-BY-SA unless otherwise noted.