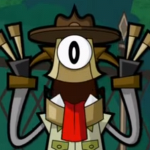 "Harro! I'm Ranger Jinx and I will be your guide today!": D

Any question? Ask me anything. Don't worry, I won't bite. =3

She is a fusion of a shark, bat, and a cat Mixel. She is simple-minded but agile, energetic, and curious. She is bright, cheerful, crazy, loud, and wild. However, she can get easily upset and might destroy everything near her. She is very competitive as she thinks she's better than everyone else. She is egoistic and a bit arrogant.

Sharkitty is mostly pink in color. She has a hot pink face and beneath is light pink. She has two shark-like fins used as her ears and gill slits beneath her eye as her nose. She has a body similar to Flurr's with four legs and an eye on each side of them. She has a pair of bat wings similar to Flurr and Globert's. On the end of her body, she has a shark tail.

Sharkitty has the ability to run and fly with her wings. She can also bite other objects with her shark-like teeth/fangs. Her eyes on both of her legs can be used to see through things.

Little is known about Sharkitty's early life. However, she managed to hang out with other mixels and make friends with.

Retrieved from "https://mixels.fandom.com/wiki/User:Kjay777-300?oldid=279341"
Community content is available under CC-BY-SA unless otherwise noted.