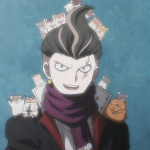 aka Tanaka the For🅱️idden One

SEE ME ON LUCKY SCREENSHOTS WIKI MY DOODS!!! [1]

A Mixels fan. Duh. Who is cringy.

Call me whatever as long as it ain't something I hate.

I am the Pyrrha Nikos and Nora Valkyrie of this wiki.

Been collecting since December 2015.

I have all Mixels S1-S9. Sorry if Krog is not in the pic. I do have Krog, just that a piece was broken when this photo was taken.

Opposites working together create a furious maelstrom! The Ocean's Core theme deck brings together the raging Ocean Cyclone of Kyogre and the blazing inferno of Combusken. Thanks to its α Growth Ancient Trait, Whiscash can power up fast to unleash a fearsome Earthquake, while Milotic uses Aqua Swirl to put your opponent's big attackers on the Bench! So take a shot with this medley of Fire and Water—because when the ocean burns, nothing can stop you!

"ABSOLITE IS RUINING HUMANITY. SAVE THE ORIGINAL ABSOL."

I have many but here's some:

Leader of the Temperals Tribe. Part of Mixels Series X.

A calm member of the Temperals Tribe. Part of Mixels Series X.

Add a photo to this gallery
.

Retrieved from "https://mixels.fandom.com/wiki/User:KappaDash?oldid=335384"
Community content is available under CC-BY-SA unless otherwise noted.