The Music Prank[1] is the seventeenth episode of the Mixels stop motions. It was released on April 19, 2016 on YouTube.

It's show time for the Mixies at the downtown stage and everyone is waiting for them to start. When Tiketz arrives, Trumpsy decides to prank him, playing a siren noise as he runs around. Next up, Busto gets the prank treatment from Tapsy, sounding like a bass drum as he waddles. But the jig is up when Kuffs suddenly appears and busts Trumpsy red-handed! Booo-hooo…[1]

The Mixies are performing when the MCPD arrive. The Mixies stop but decide to play a prank on the MCPD. As Tiketz drives by, Trumpsy plays siren noises and Busto takes a step, Tapsy plays loud noises. Trumpsy laughs but is caught by Kuffs and told off. 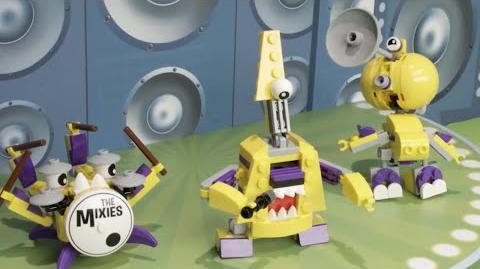 Retrieved from "https://mixels.fandom.com/wiki/The_Music_Prank?oldid=368473"
Community content is available under CC-BY-SA unless otherwise noted.