Rock pops are a combination of the rocks that the Cragsters eat and Electroid zap-zaps. They look like the rocks produced by the Zaptor & Seismo Mix in Another Nixel.

When Volectro has his zap zaps fall in Krader's rocks, he is angry at first, but has an idea. So, they mix and set up a stand to give away free samples of rock pops. 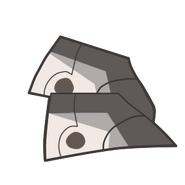 The primary object needed to make it; Rocks.

The secondary object needed to make it; Zap-Zaps.
Add a photo to this gallery
Retrieved from "https://mixels.fandom.com/wiki/Rock_Pops?oldid=364705"
Community content is available under CC-BY-SA unless otherwise noted.