Were you looking for the episode of the same name?

Nixels are the dark, uncreative, uncool enemies of the colorful, creative, cool Mixels and the primary antagonists of the Mixels franchise. They are led by Major Nixel and reside in the Nixels Land.

Nixels are small but vicious, annoying, crazy and destructive creatures who are spread all over the land of the Mixels. They live to tear down and break apart the world around them, including any cool combinations that the Mixels create. In fact, there is nothing the Nixels hate more than when two or three Mixels combine together and get super powers. So the Nixels have made it their mission in life to put and end to such crazy creativity all together. And the only way to do this is to hide and destroy the Cubits which enable the Mixels to combine in the first place. One Nixel can do little harm. But when they swarm together they can break apart a Mixel in seconds. So now you’re warned!

They consider themselves far superior to the Mixels, but are only able to say "Nixels", "Nix", "Mixels", or "Mix", blow raspberries, whistle, laugh, sputter, yell, inhale, exhale, and scream.

Nixels, are very, very small. So small in fact that they can be easily crushed by Seismo's large feet. They have little ears, arms, and legs. Their bodies are mostly black, with the exception of their circular, angry white faces. It's possible that the black outer shell of a Nixel is like armor since it's shown that they can pop right out and run around without it. It is unknown how they control the hands in the armor, as they have no hands when outside of it.

However, there is a member that is an oddity to this rule. He is Muscle Nixel, and is about the size of Major Nixel and is very buff.

After the Mixels fight for the last cookironi (and break it), the Mixels see a single Nixel having a whole box of them. The Mixels then start chasing it.

A Nixel attacks Seismo and Flain, and says that Mixels blow and Nixels rock. But they just kick it away after it pesters them a bit. Angry, he calls an army. They take a Infernite\Cragster cubit out of Seismo's hand, and start beating up Flain and Seismo. The two Mixels then reclaim the cubit, mix and defeat the Nixels. One last Nixel attacks them, but it is flattened by Seismo. In "The End" scene, it attacks and destroys the letters that make up "The End", breaking the fourth wall.

Major Nixel instructs 3 Nixels to bring back a cubit from each tribe, which two Nixels fail in doing. When the successful Nixel comes back, it brings back a cubit, but also the Seismo/Zaptor mix along. The mix attacks Major Nixel, and the Nixels laugh at him.

The Nixels chase Shuff and Volectro until they ambush them near a ledge, but Flurr and Gobba make a ice slide and a bobsled. While Gobba and Flurr mix, they destroy the ice slide, but the Gobba/Flurr mix makes a ice statue of Major Nixel and says "Attention!" which causes the Nixels to stop and stand there, confused. Flurr says that that should hold them for a while.

In this episode, Major Nixel instructs the Nixels to steal Cubits by painting themselves like Mixels. He painted one like a Frosticon and one like a Flexer. Later, when they encounter Lunk and Balk, the two Mixels mix. The new mix asks the Nixels if they want to mix like them, and the Nixels pretend to mix. The Lunk/Balk mix says that they're weird and runs away, forgetting to grab the Cubit. Soon, the Nixels come back, but Major Nixel mistakes them for Mixels. Then, Major Nixel quickly grabs the Cubit and runs away, but the actual Balk/Lunk Mix comes and stops him.

The joke said by the stand-up comedy mix of Kraw and Gobba is “That's no Nixel, that's my brother-in-law!” 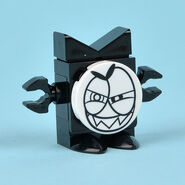 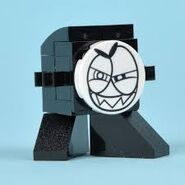 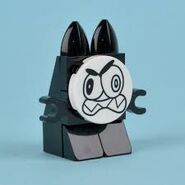 "Why do guys always have to be Nixing our fun?!"

Oh no, NOT THE SHOVEL!

The Nixels and their leader.

The back of a Nixel when stomped on by a Cragster.

RUN! IT'S A SWARM OF NIXELS!

The loading screen for base defends in Calling all Mixels.

Nixels being painted by their major.

Yet he isn't looking..

Nixel bragging about how good they are. 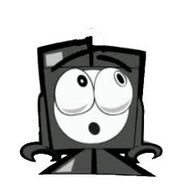 We feel slimy and wet... 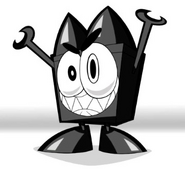 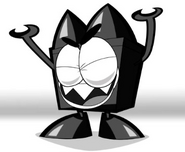 Apparently what a Mixel looks like in a Nixel's view...

What happened to our bodies?

Sand art made by another pesky Nixel!

A giant cloud sent by Nixels 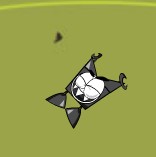 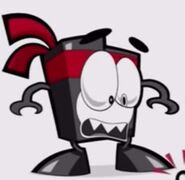 A tower of Nixels
Add a photo to this gallery
Retrieved from "https://mixels.fandom.com/wiki/Nixels_(creature)?oldid=56124"
Community content is available under CC-BY-SA unless otherwise noted.