There were two different Mixels websites. There was one for the LEGO Mixels theme accessible via LEGO.com's Products page, and another for the TV series that was accessible via Cartoon Network's website. These sites were the definitive resources for information on Mixels, other than this wiki.

In late 2018, both sites were nullified. LEGO's website was replaced with a farewell message, but later the message page breaking and no longer being accessible. Cartoon Network's website now redirects to the main site for the network.

The site could be accessed here.

An archived version of the final update to the site can be found here.

Upon entering this website, there were two slides showing the sets of the current series, urging the user to collect them all. There were also three Nixels that could be clicked on to knock them out. Clicking different buttons would take users to different pages.

On January 12, 2016, the site homepage received its first major redesign. A Mixopolis Breaking News report was added, as well as Citizens of the Week, and an overall different layout.

On November 9, 2017, the website unexpectedly received its sunset update that simplified the site down to a Breaking News farewell message with the Games, Building Instructions, and Videos links now directing to the main LEGO site, and other portions of the website removed entirely. Alongside this, there was a link to the site for BrickHeadz, the line's successor.

On September 10, 2018, the site was removed, however, building instructions and videos are still accessible on other parts of the LEGO website.

This section listed all of the sets by series. In early January 2015, this part of the website was unavailable but was eventually fixed on January 6. This section was removed with the sunset update.

This section replaced Downloads in late January 2015. It contained the building instructions for the sets, Mixes, Maxes and Murps, along with some examples of creations that fans made, along with an automatic link to the gallery submission page. This section was removed with the sunset update.

In this section, users with a LEGO ID could upload the models they have created. They could check off the sets they used to make the model. This section was removed with the sunset update.

Note: None of the games are listed on LEGO's website, they are only accesible through links listed on the games' respective wiki pages.

Who's In The Mix?

Main article: Who's In The Mix

This section opened up a video gallery of every single episode in the TV series, stop motions, TV commercials for the sets, and chapters of The Wonderful World of Mixels. The only category is "Mini Movies". This section was removed with the sunset update and a small number of the videos were moved to the general videos section of LEGO's website.

Users could learn more about everything there is to know about the Mixels here. There were six categories. This section was removed with the sunset update.

This category described every character, divided by tribe and complete with images.

These three categories described and showed most Mixes users can make with sets, as well as Murps and Maxes. These categories were originally one until late January 2015.

This contained the same content as the original Downloads page and was placed in here as a category in late January 2015.

This section opened up wallpapers users can add to their computers, as well as building instructions for the sets, Mixes, Murps, and Maxes. In late January 2015, this page was moved into the Explore section and replaced with the Build page.

This site was accessed here.

Cartoon Network's Mixels website was strangely not updated to reflect the introduction of the Series 4 tribes and further. This was most likely because from being heavily directed by Chris Corum, who is not as active in Mixels as he was.

The Cartoon Network website was worked on by Clown Pirate Productions. They finished work on the site in late June 2014 and it is confirmed the site will no longer update to include Mixels from any series after Series 3.

"Mixels.com will be a central hub where fans can watch all of the shorts and learn more about the characters and setting of the Mixels world. Kids will be able to interact with the brand by exploring the environment of each tribe and meeting the Mixels, mixing multiple Mixels to discover lots of fun combinations and playing mini-games featuring characters from different tribes. Each tribe's world will be filled with rich, colorful graphic elements that portray that environment's unique qualities. Using cubits, kids can mix together Mixels from the same tribe to form a Gigantic Max or mix together elements from different tribes to discover new and exciting combinations. By making successful mixes, kids will unlock exclusive mini-games. As new waves of Mixels are introduced, new tribes and mini-games will be added to the site to reflect the ever-growing universe.

Upon entering this website, there was an introduction of the tribes in their respective homelands with the theme music, as well as Flain presenting the logo.

In here, there was an interactive animation where the user can choose between tribes and learn more about them. There was also a task that users could do in each location to find Cubits, which unlocks the Max and the minigame for each tribe, with each minigame being a reskin of an existing Cartoon Network game.

Users could learn more about Flain, Zorch, and Vulk, along with watching videos on each of them. To find the Cubit, users must click the lava pool and then click on a random Living Flame.

Users could learn more about Volectro, Zaptor, and Teslo, along with watching videos on each of them. To find the Cubit, users must click the power box and then search for the Cubit by using a flashlight.

Users could learn more about Seismo, Krader, and Shuff, along with watching videos on each of them. To find the Cubit, users must click the mailboxes and then click on a random mailbox.

Users could learn more about Tentro, Kraw, and Balk, along with watching videos on each of them. To find the Cubit, users must click the donut-shaped house in the background and then knock all of the Nixels off of it.

Users could learn more about Lunk, Flurr, and Slumbo, along with watching videos on each of them. To find the Cubit, users must click on the ice slide in the background and catch the ice cube to get the Cubit.

Users could learn more about Jawg, Gobba, and Chomly, along with watching videos on each of them. To find the Cubit, users must click on the totems to the far right of the area and make Gobba create totems until the one holding the Cubit is found.

Users could learn more about Magnifo, Wizwuz, and Mesmo, along with watching videos on each of them. To find the Cubit, users must click on the sign with the "W" over the tent door and search for the Cubit using the light from the eye over the stage.

Users could learn more about Glomp, Torts, and Glurt, along with watching videos on each of them. To find the Cubit, users must click the tree on the right and click on a random bubble.

Users could learn more about Scorpi, Footi, and Hoogi, along with watching videos on each of them. To find the Cubit, users must click on the small sunflower to the right of Hoogi and knock all of the Nixels off of the cactus.

This opened up a video gallery of all Season 1 episodes.

This is the minigame for finding the Infernite Cubit. Players have to break Cubits of the same color that are connected to each other. This game is similar to the game "Pokémon - Breakdown Blast".

This is the minigame for finding the Electroid Cubit. Players have to guide Cubits of a certain color through a mess of other Cubits. If the tower touches a wrong colored Cubit, it will blow apart and land in a different location. A timer is set up for difficulty. This game is similar to the game "Pokémon - Towering Legends".

This is the minigame for finding the Cragster Cubit. Players use the Cragsters Max to drill/dig underground, avoiding boulders and Nixels. Cookironis can heal the Max, while Cubits destroy all of the Nixels on the screen. At the end of level four, a giant Nixel with tentacles will appear and sling them at the player. The player must avoid them and defeat it to finish the game. This game is similar to the game "Codename: Kids Next Door - Grounded".

This is the minigame for finding the Frosticon Cubit. Players have to press the mouse or keypad button to breathe ice breath which will pump the player up and keep them from falling to the ground and freezing. The player must avoid Nixels on the way. This game is similar to the game "Ben 10: Alien Force - Jetray In Too Deep".

This is the minigame for finding the Fang Gang Cubit. Players must spin around and shoot logs at Nixels to keep them from getting hurt. This game is similar to "Codename: Kids Next Door - Cell Shock".

This is the minigame for finding the Flexer Cubit. During this game, players must switch between Tentro and Kraw to avoid obstacles like Nixels while rising on a platform through the Rubberlands/Sproingy Lands. This game is similar to the game "Ben 10 - Critical Impact".

This is the minigame for finding the Spikels Cubit. Using the mouse, players must control the Spikels Max to pick up coconapples and plant them into the ground while avoiding Nixels. Click the mouse button to jump. This game is similar to the game "Chowder - Give Trees a Chance".

This is the minigame for finding the Glorp Corp Cubit. Glomp has to cover the whole ground with his slime without getting hit by the Nixel. This game is similar to the game "Camp Lazlo - Paint Can Panic".

This is the minigame for finding the Wiztastics Cubit. During this game, players must click on each Wiztastic to make them jump so they can collect the magic, avoid Nixels, and collect as many cubits as they can before time runs out. This game is similar to the game "Camp Lazlo - Jumping Jelly Beans". 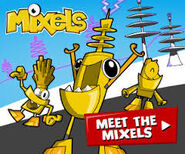 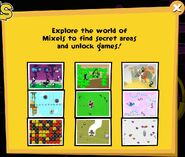 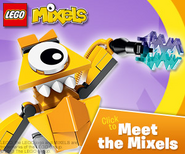 Website error as of January 6, 2015 (notice the unclickable parts). 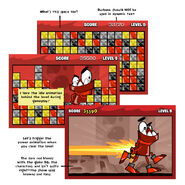 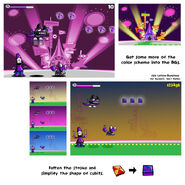 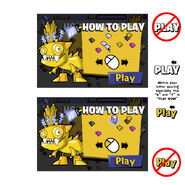 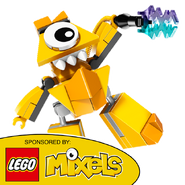 Retrieved from "https://mixels.fandom.com/wiki/Mixels_Websites?oldid=366439"
Community content is available under CC-BY-SA unless otherwise noted.