Mixels are small creatures that can mix and combine with one another in creative and unpredictable storylines. Each Mixel is assigned an element which are divided onto tribes: earth, fire, electricity and more.

The Mixels have the power to Mix, Max, and Murp. When they mix, they combine two Mixels to gain new powers. Max means to combine all the Mixels from one tribe to make a giant mega-Mixel. Murp is when something totally weird comes out of the mixing, with an all-new personality that cannot be controlled. They can do this by using the strange objects called the Cubits.

Their enemies are the Nixels, dark and uncreative creatures who want to ruin the fun in the Mixels land.

Fiery, short-tempered, but handy for a barbecue, the red-hot Infernites dwell in the magma wastelands near the Earth's core.They are red in color.

The quirky Electroids love to tinker and experiment, and they live high up in the mountains to be closer to the lightning storms (and get crazy). They are yellow in color.

The industrious miners known as the Cragsters live in a vast network of tunnels and caverns dug deep underground.They are black in color.

The Frosticons are Mixels with icy powers, and hail from the frozen crystalline shells of dead volcanos.They are blue in color.

The Fang Gang are farmers who grow crops to satisfy their large appetites.They are brown in color.

The Stretchers are aquatic-like Mixels, and live in the Rubberlands.

The Glorp Corp live in swamplands, and seek for thrills.

Mixels of the Spikels Tribe love fun. Too bad they are Spikey, hence the name.

This travelling magic troupe, the Wiztastics are known for putting on fantastic...no, spectacular shows! 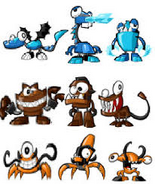 Retrieved from "https://mixels.fandom.com/wiki/Mixels_(creature)?oldid=5619"
Community content is available under CC-BY-SA unless otherwise noted.