A relaxing Infernite camping trip turns into a crazy alien abduction that reveals even more fantastical Mixels on the moon.

Get ready for a massive Mixels adventure that will take you all the way to the moon! You’ll meet a whole mess of new Mixels, including some brand-new tribes you’ve never seen before.[3]

In the Magma Wastelands, the Infernites have gone away for a camping trip. Once they arrive in the perfect spot for the night, Flamzer asks Burnard if he brought any of the camping supplies with him. Instead, he finds that Burnard didn't take anything with him; no tent, no sleeping bags, no snacks, no anything. Burnard does, however, pull out a large ice cube from his backpack (as a substitute for a campfire). Flamzer is hasty to use the cube, as it may start a forest freeze. He is eventually persuaded to use it by Burnard, who seems happy about the whole thing, and they settle down for the night. Meltus happened to bring Weenie Burgers with him, and Burnard brought Mixmallows, so they eat up.

The Infernites were all hungry, and they were ready to cook their food. Meltus' allergies kick in then, and he accidentally burns his Weenie Burger, while Flamzer enjoys his unharmed Mixmallows. Meltus's allergies continue to get worse, causing Burnard to fall out laughing. Flamzer is extremely cautious, starting to ramble on about camp safety so nobody ends up hurting themselves. Burnard gets the idea to use ice water, and then got some to help keep the cube from melting. But the water begins to spiral out of control, and it starts to freeze Flamzer. Burnard immediately springs into action; he runs to the cooler and finds three Cubits; he and Meltus combine, but they make a Murp. Trying again, they make another Murp. Finally, when they use the third Cubit, they make a Mix and melt away all of the ice before Flamzer is completely frozen.

After un-Mixing and sitting by the ice cube for a while, three Nixels are seen watching the Infernites, and they begin to make hooting noises. Looking at the moon, Burnard and Meltus suggest someone tell a story, and Flamzer is happy to oblige. In the story, one day, the Infernites were taking a stroll, but they noticed that they were being stalked by something: the Mixel Moon. The Infernites noticed and began to run, and the moon quickly followed suit. During the chase, the moon somehow transformed into a ship-space, with an arm reaching out and grabbing the Infernites to pull them in. The ship-space then blasted back up to the real Mixel Moon, and landed by the futuristic metropolis Orbitopia. The Infernites get out of the ship, and the Orbitons welcome them to the Mixel Moon.

The Infernites, however, do not take their abduction lightly, and quickly Max to attack their abductors. The Orbitons also Max in retaliation, and they fly into the sky for an epic battle; but instead, both of them realize they are friendly, and quickly fly back down to the ground and separate. Afterwards, Nurp-Naut's elder side takes control of the situation and introduces Niksput and Rokit to the abducted Infernites. The Infernites realize their mistake, and befriend the Orbitons.

Later, Nurp-Naut takes the Infernites into Orbitopia for a tour. Niksput is interested in Burnard, and asks him if he knows any tricks. The Infernite replies by having fire blow from his ears and making a rope out of smoke, which lassos Niksput and pulls him down to the ground. The Orbiton leader is impressed by the trick. In the middle of this, we focus on Nurp-Naut; Naut, the elder side, decides it is nap time for Nurp, the infant side, who doesn't want to go to bed just yet. Naut demands his other side to calm down, and they begin to argue. Eventually, Nurp goes into a tantrum and lifts three oxygen tanks. The tanks are floating towards the glass protecting Orbitopia from the vacuum of space, and Flamzer realizes that the tanks could break the dome. Niksput is calm about this, and flies over to an emergency Orbiton/Infernite Cubit to break the glass encasing it. He and Burnard Mix to save everyone, and use Burnard's aforementioned trick to bring the tanks back to the ground. However, one tank cracks the glass, and Nurp continues his tantrum, bringing up a large building; the Mix stops it just in time, although it cracks the glass and shatters the whole dome. Then a giant space vacuum sucks up the whole of Orbitopia along with the Infernites and the Orbitons.

Afterwards, the Orbitons take the Infernites outside for a welcoming party. The Nixels are aware of Rokit's Crater Tots and Nurp-Naut's Oxy-Juice, which the Infernites are eating and drinking, with Burnard gobbling up all of the refreshments. The two Nixels take the tots and juice and run off, with Rokit and Burnard, and Meltus and Nurp-Naut Mixing to retrieve the food. The Rokit/Burnard Mix corners the Nixel and puts Rokit Sauce on the tots. When the Nixel eats them, it causes him to explode. Rokit asks the Mixels if they want some crater tots, but all three of them pass up on the offer after the Nixel falls back down to the ground, unconscious. Rokit eats them all himself, causing his head to explode, while Burnard, Meltus, and Nurp-Naut laugh together.

Flamzer asks why the Orbitons chose the Infernites to abduct, and Nurp-Naut replies and tells them that they were the first signs of life the Orbitons spotted. Suddenly, the dark side of the moon approached; with the Infernites curious, Rokit told them a story about what had happened just recently. Rokit had prepared Nurp-Naut for his sleep, but Nurp wanted a story. Switching to Naut, he told Rokit to tell the kid a story, although Rokit didn't want to since he already said night-night. He eventually had given in to Nurp's begging, and told him all about the Glowkies; characterizing them as even more evil than Nixels. However, it was unknown to both that the tribe was just outside the room and ready to greet their "Orbiton neighbors". When they entered, an alarm sounded off and Rokit freaked out. When Niksput came, the Orbitons transformed into their Max, which then got knocked out by hitting the ceiling light. The Glowkies left in surprise, thinking they should have said hello some other time.

Back in the present, Bats begin to circle around the two tribes; this hints at the Glowkies' arrival. Globert, Boogly and Vampos come out of their cave and begin to chase the Orbitons and Infernites. Rokit and Meltus, Nurp-Naut and Burnard, and Niksput and Flamzer create Mixes to scare the Glowkies away. They end up in the Glowkie Caves, and Globert confronts them. The Glowkies introduce themselves, Max and then start to dance with bats as backup. Due to this, the two other tribes finally see them as non-hostile.

Burnard, Meltus, and Nurp-Naut begin to have a nice conversation with Globert. When Nurp says he is afraid of the dark caves, Globert makes fun of him and says that the Glowkies love the dark because the darkness is where the fun is. He decides to give them an example. Whisked to the performance stage, everybody begins to sing the song Don't Pull The Plug!. Globert explains, through this elaborate musical number, not to pull out the giant plug in the floor, or the gravity will come in and suck everything up. Burnard, excited, gets up from his seat in the audience and tells his friends that he is going to get popcorn. Really, however, he heads over to try and unplug the plug; completely disobeying Globert's orders. With forced help from Rokit, they Mix; with this strength, they unplug the plug. Everyone gasps, and everybody but the Glowkies (who Maxed during the performance) gets sucked in; including the moon and universe itself. Against a completely white background, the Glowkies Max breaks its electric guitar by hitting it against the ground and then shouts, to nobody in particular, "Thank you, good night!"

With everything back to normal, Meltus is alone outside the caves while the party is still happening. He begins to cry. When Burnard and Flamzer head out and find him, Meltus tells them that he is homesick and misses Planet Mixel, as it is so far away. Flamzer says he misses home too, and Burnard remarks that there is no place like home. All crying, the Infernites wake up. Back to the camping trip, Flamzer tells his brothers that the whole entire experience was just a dream, saying that there is no such thing as Orbitons or Glowkies. Both mentioned tribes all of a sudden show up and ask "What? We don't exist?!" With that, everybody but Flamzer breaks down in tears.

The two Nixels from earlier orbit around Mixel Moon, annoyed. A satellite is seen and, picking up a reading from the Magma Wastelands campsite, broadcasts surveillance footage of all three tribes to a large crowd of Nixels watching from a theater screen in Nixels Land. They are all, understandably, upset. Major Nixel shows up, outraged that there are Mixels also living on the moon of all places. Loud stomping is heard approaching Major and the swarm. King Nixel has arrived.

Most airings took place in March 2015.

Boogly: Boogly guess we say hello some other time.
Vampos: Um, that was scary-weird.
Globert: I thought it was FABULOUS!! 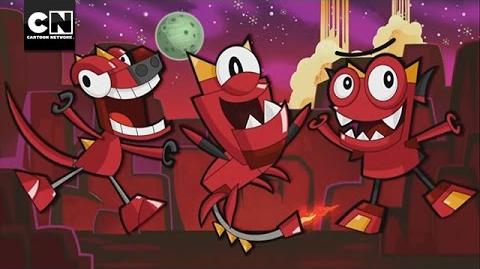 Retrieved from "https://mixels.fandom.com/wiki/Mixel_Moon_Madness?oldid=228228"
Community content is available under CC-BY-SA unless otherwise noted.