Mixed Up is the first episode in season three of Mixels, and the twenty-first episode overall. It is also the season premiere and the first ever full, half-hour special. It first aired on August 31, 2014.

“Epic Comedy Adventure” - When General Nix[sic] tries to stop the annual Mixfest, it’s up to Flain and friends to bring back mixing!

“Murp Romp” - There is a Murp on the loose and the Mixels must catch it before it destroys everything!

The annual Mix Festival is here; a day to celebrate the power of the cubits. However, due to a certain sandwich-loving Electroid, all of the Hamlogna Sandwiches were eaten, leaving the other Electroids angry with him. Due to this, Teslo asks all of the leaders of their respective tribes to come with him to get more.

At the same time, Major Nixel appears in a metal cloud floating above and lets loose his devestating new weapon - the Mega Nixel Mixel Nixer - onto the festival, making every other Mixel at the party become a zombie-like Nixel. With all of their cubits destroyed, it's up to the leaders to save their friends and Mixels Land. Gobba has a cubit, but Flain says to save it for another time. Krader also says that the only way to find more is to go to Mixel Mountain for the rainbow cubits. So, they all head there. Gobba ends up using and wasting his cubit with Kraw, but everyone finally reaches the top of the mountain and hits the giant rainbow cubit, letting tons more loose.

Meanwhile, Major Nixel is baking cupcakes. However, the tribe leaders come back mixed, and defeat him, saving the festival and their friends in the process. Glomp, Scorpi and Magnifo finally show up, marking their debut in the series.

The Glorp Corp and the Spikels are enjoying a day at Mixel Park. Torts admires how cute Scorpi is, and the latter then grows afraid of Glurt’s enthusiasm. The Spikels head off. Glomp disperses a Glorp Corp/Spikel cubit from his nose and throws it for Glurt to fetch, with the others running after him. Meanwhile, Flain, Lunk, Chomly, and Zaptor are enjoying a picnic, with Zaptor commenting on the calmness. They are suddenly interrupted by a puff of magic. The Wiztastics appear to advertise their next show, which Magnifo promises won’t be like the last one (which ended with him being burnt to ashes).

The Spikels come to see what is happening, and when the Wiztastics teleport away (out of embarrassment from Magnifo), they scare Scorpi again, causing him to run away and accidentally crash into the cubit that Glurt is carrying. This causes them to Murp, and they run off, coating the other parkgoers in slime. Both tribes that the murp belongs to end up chasing it (with some complications) all the way to the aforementioned magic show. They find it on the rafters above the stage, where they find Mesmo, and Torts mixes with him to get to the murp. While they accomplish this, Magnifo does a trick that blasts magic energy out of his hat and to the roof. This destroys the rafters and causes all of the Mixels to fall down, who then de-mix and are arranged in an upside-down pyramid pose.

After, Vulk claps and is revealed to be the only one who attended the show (and enjoyed it), which overjoys Magnifo. Then, he gets crushed by the other Mixels at the end.

Volectro and Teslo: Hey! Where’d all the Hamlogna sandwiches go?
Zaptor: I don’t know… (Shifts eyes)
Volectro and Teslo: Hm…
Teslo: (Jumps up) EVERY MIXEL…
Volectro: (Jumps up) …LISTEN UP! It seems that Zaptor here has eaten all the Hamlogna sandwiches AND RUINED THE MIXEL FESTIVAL!
[Cut to the remaining Mixels, who stare at them in shock. Shuff pops up.]
Shuff: Ooh, harsh!

Gobba: Can we use the Cubit now?
Kraw: Not yet, Gobba.
[Cut to them balancing on the edge of a ledge, all but Flurr looking terrified.]
Gobba: Should we use the Cubit now?
Krader: No, no, Gobba!
[Cut to the top of the mountain. The six pop up and start speaking in awe. They run up to the rainbow Cubit. Millions of Nixels start jumping up from behind.
Flain: All right, man, now’s a good time for the Cubit!
Gobba: The Cubit? Ha-hahah-hah! I used it a long time ago!

Glomp: That Murp is destroying Mixel Park!
[Cut to the damage. Kraw is completely encased in slime that’s dangling from something, Volectro’s body and hands are encased in slime, and Jawg is fully encased in slime. A few slime-covered fallen trees are also in the area.]
Glurt/Scorpi Murp: Murp! Murp! (Spins around, his tail chops down another tree and he leaves.)
Glomp: If we don’t catch him quick, he’ll slice and slime up all of Mixel Land!
Hoogi: And poor little Scorpi will miss our nightly nuzzle-wuzzle time! WHAT’LL WE DO?!
Footi: (Puts arm around Hoogi) Hoogi, it’ll be fine. As long as we listen to our hearts. (Starts to ballet dance.) Yes, we must listen to our ever-loving hearts! And my heart says: to save our friends, (pulls out Glorp Corp/Spikel Cubit) we must mix ‘em to get ‘em. 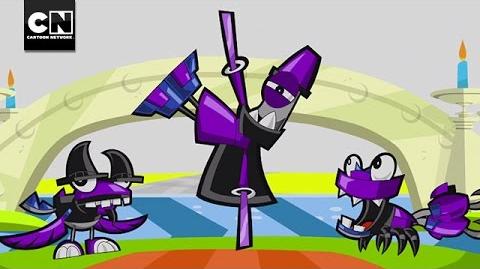 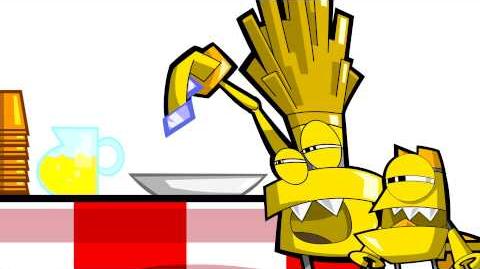 Retrieved from "https://mixels.fandom.com/wiki/Mixed_Up_Special?oldid=52873"
Community content is available under CC-BY-SA unless otherwise noted.