“At the Mixopolis Zoo we will see how even the wildest creatures of the natural world use Mixing to survive.”
— Teacher

The Mixamals are the wildlife of Planet Mixel that can also Mix like typical Mixels can.

There are various species of Mixamals. Their home is the Mixopolis Zoo. They get angered when someones shows them their backside, while slapping their bottom, wiggling their hips, and singing "Nanny, Nanny, Nanny!"

Amphipods are frog-like Mixamals with a reptile-like design as well. They have green skin in various tones with various amounts of eyes. They are one of the few Miximals that can speak in clear English. They apparently live under damp logs, but are also capable of living on rocks.

They are voiced by Daran Norris.

Bonzipods are monkey-like Mixamals. They are brown and cycloptic with a diaper-like bottom. According to one of the students of Mixopolis Middle School, they seem to be the most Mixel-like. Despite the apperance of them, standard monkeys have also been alluded to as well.

“This is where we keep the Mixeloptors. The most unpredictable Mixamals in the zoo. Man, if they got out, eek! Let’s just say they might be a tad dangerous.”
— Ranger Jinx 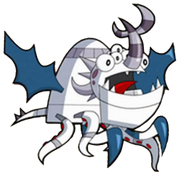 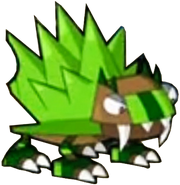 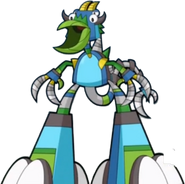 The Mixeloptors are the most dangerous Mixamals in the zoo. They have to be contained in specially-locked cages to prevent them from escaping. They have a variety of appearances and designs to them as well. When they did escape, they managed to make the Mixeloptor Mixes, causing even more havoc.

They are voiced by Michael Winslow.

“When fully Mixed, the Mixapods can reach up to 200 feet. That’s nature’s way of allowing them access to the choicest leaves."
"Yummy! Thanks, nature!”
— Ranger Jinx and Mixapod Mix

Mixapods are green giraffe-like cyclops Mixamals. They have long necks, but can combine with each other into the Mixopods Mix to grow even taller, letting them reach a larger height. They are also one of the few Mixamals that can speak clear English.

They are voiced by Eric Bauza.

Subterranean Borers are orange and purple rhino-like Mixamals with mole-like features as well. When they Mix, they can create the Borers Mix to burrow through the ground easier, letting them get worms to eat.

“Here we find the gentle, elusive, Crunch Doodle. These small, helpless creatures are often victims of torment, as is common in the natural world.”
— Exhibit Narrator 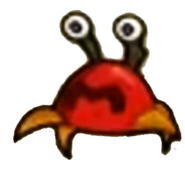 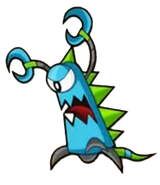 The "Predator" is a small blue Mixamal. They commonly prey on Crunch Doodles thanks to being larger than them, but they are easily scared off by the Mix of them. 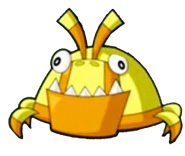 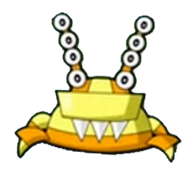 The Mixaplotapusses are yellow hippo-like Mixamals with insect-like features. The male and females of the species have different designs, with one with multiple eyes. They have a family-rearing system.

The Crocs are green reptile-like Mixamals. They have large jaws that are big enough to even hold a child-sized Mixel.

The baboon-like Mixamals are brown monkey-like Mixamals. They are easily angered and have the ability to stretch out their arms to long lengths.

“Hey now, the gassy mud is for Mixamals only. Can't you read the sign?”
— Ranger Jinx

Two mud-dwelling Mixamals pop out of the gassy mud pit as Mixadel lands in it. Not much is known about their appearances, but one is a greenish cyclops, while the other is brownish with four eyes. There is also a sign that shows one.

Mixie Cats are a domesticated breed of Mixamals, normally kept as pets.