The Make a Mixel... Make a Story! Competition was a contest held in the LEGO Club Magazine, July/August 2014 issue. All entries had to be received by August 15, 2014. Five winners received a $100 LEGO gift card. The winners were announced in the January/February 2015 LEGO Club Magazine.

Entrants were tasked to create their own Mixel with its own name, tribe, home, and powers. 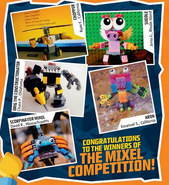