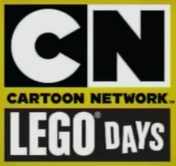 Were you looking for LEGO Day?

The event is similar to the American network's LEGO Day event; however, it took the schedule for several days. It was in promotion of the theatrical release of The LEGO Batman Movie.

All Mixels specials and shorts (including Movie) aired during this event.

Retrieved from "https://mixels.fandom.com/wiki/LEGO_Days?oldid=351340"
Community content is available under CC-BY-SA unless otherwise noted.