Klinkerton, also referred to as Klinker Land, is a location on Planet Mixel. It is the home of the Klinkers.

Klinkerton appears to be located in a barren desert somewhere on Planet Mixel. Klinkerton itself has various pipes and huge parts of grey and rusty machinery making up the outside. It somewhat resembles an old fashioned Victorian building as well. It appears to be somewhat old and falling apart. It also has various smokestacks.

In Mixels Rush, Klinkerton is called Klinker Land, and is the second world in the game. 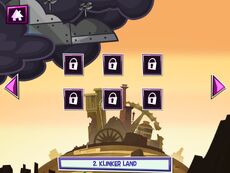 Retrieved from "https://mixels.fandom.com/wiki/Klinkerton?oldid=357192"
Community content is available under CC-BY-SA unless otherwise noted.