Jawg & Lunk Murp[1] is the fourth episode of the Mixels stop motions. It was released on June 20, 2014 on YouTube.

Lunk and Slumbo are trying to rest, but Jawg has a stick and wants to play fetch! Watch what happens when Lunk finally throws the stick for him but Jawg returns with a cubit![1]

Slumbo and Lunk take a rest by a rock while Jawg wishes to play fetch with them. Slumbo remains still and shoos Jawg away. Lunk decides to play and lazily throws the stick a short distance while Jawg sprints off. As Lunk attempts to pick up the stick, Jawg returns with a Cubit and the two Murp, which runs around and bumps into Slumbo, waking him up. 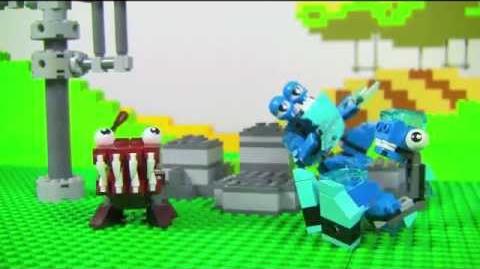 Retrieved from "https://mixels.fandom.com/wiki/Jawg_%26_Lunk_Murp?oldid=367964"
Community content is available under CC-BY-SA unless otherwise noted.