The Infernites are one of the tribes in Mixels. They are lava-slide loving Mixels whose fiery features make up their personalities and are red in color.

Flain - The leader who is super smart and always tries to keep a level head... that's on fire!

Vulk - The dim-witted but warm hearted one whose hands hold his powers and gives painful high fives.

Zorch - The annoying prankster who can run rapidly with fiery jets on his backside.

As this is the fire tribe and the Frosticons are the ice tribe, the two tribes don't really get along well. This is even shown in their mixes and murps; most of the time, they make a murp, and the mixes aren't very good-looking, either. Also, the most disappointing murp (Flain and Slumbo) is made by trying to mix two members of these tribes. However, Flain and Slumbo seem to be good friends. He also seems to like Lunk as both were having a picnic with Zaptor and Chomly in Mixed Up.

Flain seems to hate Chomly and Jawg, but in Mixed Up, he was having a picnic with Chomly, along with Lunk and Zaptor, which means he could be friends with Chomly after all. Gobba is neutral.

Flain and Kraw are known to be friends, as they went snowboarding. 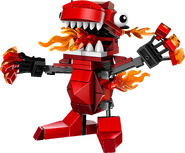 The infernites in their hot tub.

The Infernites on a poster. 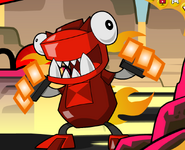 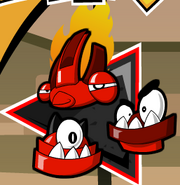 Cookironi!
Add a photo to this gallery