The Chosen One (Himself)

Nixels
Having his dramatic moments interrupted

"This is going to be FABULOUS!"

Globert, like the other Glowkies, is a bragger who believes he can dazzle any audience. He is the tribe’s ultimate exhibitionist. He is somewhat flamboyant, as displayed through his voice and his word choices, along with his performance outfits. He gets upset when others interrupt his dramatic moments.

Globert has a round body with a tail-like back. He has a mouth with an underbite with two teeth pointing up and a tongue with light cyan color. At the top of the body is a square head connected to the bottom of the body with one huge cycloptic eye surrounding the head, and two bat wings on both sides and black pointy ears at the top. He also has two long teeth on both sides with three smaller teeth between them. He also has two feet with two light cyan toenails.

Globert's eye has a shiny, hypnotic glow. Any Mixel or Nixel who sees it will become mesmerized. He can also fly with his bat-like wings.

Little is known about Globert's past. At some point, he gained a love for performing and managed to become the leader of the Glowkies. During a time when he tried to introduce himself and his brothers to their Orbiton neighbors, it ended in a botched attack from the Orbitons, leaving the Glowkies to leave in confusion. 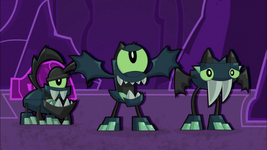 During a supposed attack, he tailed Burnard and Nurp-Naut, only to find him scorched and running away back to the caves. He attempted to make himself dramatic, only for his brothers to ruin the introduction, and eventually invited them to join in a cave rave. He later performed a big musical number to tell about the dangers of the Gravity Plug.

When Flamzer later claimed that he did not exist outside of his story, he broke down into tears. ("Mixel Moon Madness")

At one point in time, Globert joined Nurp-Naut and Burnard in their ship-space to explore Outer Space. ("Mixed Up Maze")

Globert had also attended a special convention with his Glowkie brothers, fellow alien tribe the Orbitons, and new friends, the Infernites. At it, they competed in quite a few events. ("Mixels Convention Craze")

Globert was one of many Mixels who were forced to outrun the Nixelstorm and help shut it down. ("Mixels Rush")

Globert, at some point, received a Mixamajig Key and was one of almost all of the Mixels who searched and fought for the Mixamajig, and then captured by King Nixel. He Maxed with his branch of the Glowkies in order to defeat him, and Mixopolis was revealed by the Weldos soon after. ("A Quest for the Lost Mixamajig")

Globert was released as part of the Series 4 Mixels sets in the February 2015 product wave. His product number is 41533 and he contains 45 pieces.

Globert is a luminous talent! He may live in the darkest caverns of the Mixel Moon, but this showboater believes he can dazzle any audience. For the Glowkies tribe’s ultimate exhibitionist, everywhere is a stage to show off his talent. And when the lights go down, Globert can hypnotize anyone with a spellbinding stare from that glow-in-the-dark cyclops eye!

Globert was originally going to have black wings, which are slightly different in the preliminary artwork. 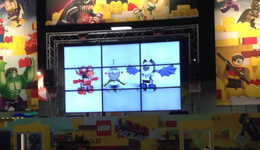 Globert's name is a pun on the name "Gilbert" and the word "glow".

He is based on an average bat.

In the TV series, and where sound clips are used, Globert's voice is provided by Dave Fennoy. He has a slight British accent.

Globert was first revealed as a character in the Mixels franchise on July 24, 2014 at San Diego Comic-Con International. Both his LEGO set and cartoon artwork were shown. Alongside him were Nurp-Naut of the Orbitons and Burnard of the Infernites.

Globert reappeared with the rest of Series 4 through 6 at Toy Fairs in late January and early February 2015.

Globert debuted in the TV series on March 9, 2015 in Mixel Moon Madness, while his LEGO set officially became available on February 1 with the rest of Series 4.