The Fang Gang are farmers who grow crops to satisfy their large appetites, and live in the Farmlands. They are brown in color.

The Fang Gang is the group with the biggest appetite, and they can get seriously crazy on an empty stomach.

Jawg - As the leader, he's got super sharp fangs to guard the crops.

Chomly - The lazy one who'll eat anything that isn't already nailed down.

Gobba - The bite-loving one who makes the totems in their home and help to make the things around them.

Flain dislikes Chomly, but in Mixed Up, he was having a picnic with him, along with Lunk and Zaptor, which means he could be friends with him after all. The rest are neutral.

Gobba and Kraw appear to be best friends, the rest is neutral. 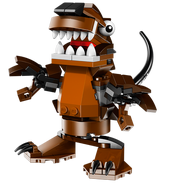 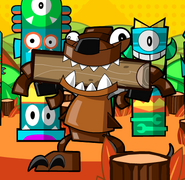 Add a photo to this gallery
Retrieved from "https://mixels.fandom.com/wiki/Fang_Gang?oldid=46961"
Community content is available under CC-BY-SA unless otherwise noted.