Coconapple is the first episode in the first season of Mixels. It first aired on February 12, 2014. It is also the pilot episode of the series.

Seismo reluctantly agrees to mix with Flain to get to a delicious coconapple.[sic][1]

When there's a coconapple just out of reach, what are Seismo and Zorch to do? MIX! At least, Zorch seems to think so!

The episode starts off with an introduction to the Infernites and Cragsters. While Flain is in a hot tub of lava in the Magma Wastelands, Zorch pranks Vulk by whipping him with a towel, angering Vulk. When Vulk attempts to chase Zorch, he zips off, leaving Vulk dizzy in his trails.

Meanwhile, above the Mine, the Cragsters are digging around in a large room, introducing themselves to the audience. The scene cuts to a landscape somewhere in Mixel Land where Seismo is struggling to get a coconapple hanging from a tree that is out of reach.

Zorch sees Seismo and zooms towards him. When Seismo explains his need to get the coconapple, Zorch pulls out a special object called a Cubit and offers to mix, but Seismo cowers behind the tree. Zorch begins to tempt Seismo, and Seismo eventually thinks about it and gives in. When the two grab the Cubit, it transforms into a giant mixing batter. Seismo grows fearful of what is going to happen, but Zorch reacts happily to it.

The mixing batter picks up the two Mixels and drops them in where they spin around for a while before being smashed into each other. The batter explodes, and when the smoke clears, the Mix created is revealed. Their Mix stands in an action pose for a few seconds, before curiously taking a look at the bottom of his feet, which turn out to be jet boosters and blast him in the eye. The Mix eventually goes out of control, bringing them across the skies.

They are brought through the Mine, crashing through Krader and Shuff, and into the Magma Wastelands and Flain's hot tub. Flain eventually becomes overwhelmed by the clogged lava caused by the Mix, and his fiery head explodes. Flain appears very annoyed when he flies up in the explosion and out of view.

Seismo and Zorch split apart off-screen and fly up in the explosion. Seismo gets angry at Zorch and attempts to chase him, despite being in mid-air. They both fall into the coconapple tree where they started, and fall back to the ground. Seismo tells Zorch that he doesn't like him, but the coconapple falls off the tree and knocks him out, falling into Zorch's hands.

This leaves Zorch off happy, and the episode finishes with him eating it.

This episode, "Cookironi" and "Hot Lava Shower" aired on February 12, 2014 directly following the Teen Titans Go! episode, "Be Mine" and received a total of 2.005 million viewers. 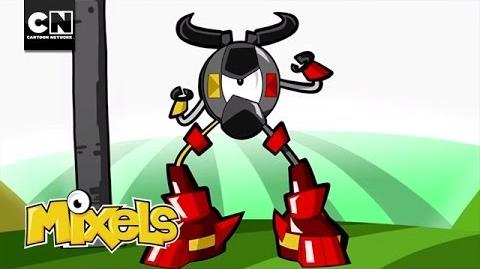 Retrieved from "https://mixels.fandom.com/wiki/Coconapple_(episode)?oldid=340246"
Community content is available under CC-BY-SA unless otherwise noted.