Eye in the sky

"Hey, is there something wrong with the sound?"

This brave member of the Newzers tribe is MIX TV’s ‘eye in the sky’ who will go anywhere to cover a story. Whether hovering low in a small room or soaring high for shots of the whole of Mixopolis, Camsta always delivers award-winning pictures. So spin those rotors and launch into Camsta’s next job!

Camsta is mostly blue. He resembles a news helicopter. He has a single large eye inside a grey camera lens. On his right side is the Mix TV logo. On his head, he has a red light on the left, a white light on the right, buck teeth, and a small jaw with two sharp teeth. He has yellow and black ski-like feet. His arms are striped blue and yellow with yellow pincers. On his head is a black propeller. He has a tail as well, with a smaller black propeller.

In the cartoon, he has a black stripe on the top blue part of his head, which connects to the top black part of his head. His white light is a bit far away from the Mix TV logo, and his red light on the left has been replaced with another logo. The grille on the front of his head has two lines instead of three and his lens connector lacks any stripes.

Camsta can fly, as well as recording events using his camera eye.

Little is known about Camsta's past. However, at some point, he began working for Mix TV as a cameraman. 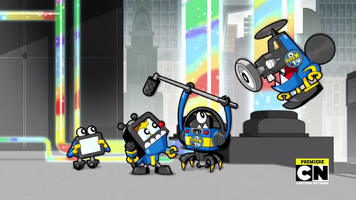 Camsta helped record news reports with Screeno and Myke at the Mix TV station. Later, he helped Screeno and Myke into the Nixels' tower and recorded King Nixel taunting the Mixels; broadcasting it to Mixopolis Stadium's jumbotron and exposing the King's plan just before he nixes everyone. ("Nixel, Nixel, Go Away")

Camsta and his brothers shot a scene of Spinza carving an ice sculpture, only for failure to ensue. ("Nindja in an Epic Ice Sculpture Fail")

Camsta was released as part of the Series 9 Mixels sets in the October 2016 product wave. His set number is 41579 and contains 62 pieces.

The set includes a Nixel with nerd glasses.

Camsta's name is a play on the word "camera".

Camsta resembles a news helicopter and a camera.

In the TV series, and where sound clips are used, Camsta's voice is provided by Gregg Bissonette.

Camsta appeared with the rest of Series 7 through 9 at Toy Fairs in late January and early February 2016.[1][2]

Camsta debuted in the TV series on October 1, 2016 in Nixel, Nixel, Go Away, while his LEGO set officially became available on October 1 with the rest of Series 9.