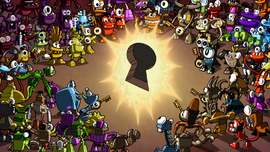 From Mixel Moon Madness onwards, numerous freelance character designs appeared as background Mixels to represent the other Mixels of a tribe besides the main three to six.

The Bats were revealed to be background Glowkie Mixels.

Introduced in A Quest for the Lost Mixamajig

Most of the background characters show up during the scene of which everyone meets up at the Mixamajig Threshold and they begin to question who the chosen one is.

The lower body of a single background Wiztastic, dubbed Mr. Ius, shows up in the Mixamajig Threshold scene. His model is somewhat recycled from the first Mondo Mix, only colored purple and with a small square replacing the slime cannon.

A couple of background Munchos first appear having a picnic when Muncholand is introduced. Soon after, many more background Munchos show up at a party. Later on, the same Muncho Mixels are depicted in the corners of the congregation scene.

A group of background Mixels from an unknown tribe appear in the top left corner of the congregation scene.

Introduced in Every Knight Has Its Day

Mixing, So That's How It's Done!

Both known staff are Spikels.

Five uniquely-designed Mixies were meant to be building challenge focuses on the LEGO website. However, only two were released.

Retrieved from "https://mixels.fandom.com/wiki/Background_Mixels?oldid=340074"
Community content is available under CC-BY-SA unless otherwise noted.